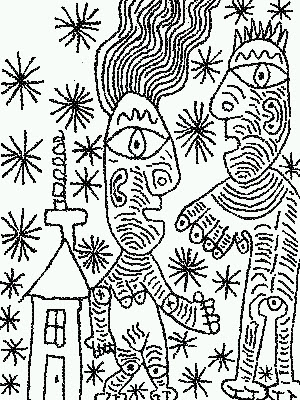 Augusta, Dusty, and the Bunnies
"I’ve just known Dusty for a couple of months, so my story doesn’t have quite the depth as her story. But sometimes we know someone better as a stranger than we know a long time intimate, so please take note of what I have to say.

I am first and foremost a cop. Most people don’t like cops. Cops enforce the law and are often blamed for the law. I could go on and on about how we don’t write the law, but that is for another time. I’ll try to stick with what I know of Dusty.

A couple of months ago we heard that the president of the United States was coming through Dustland and our mayor, Rube Adams, decided it was time to clean up our city once and for all. Though he had been treated for many years for his obsessive compulsion disorder, he never really was cured. When he said that he wanted to clean up, he wasn’t kidding.

He issued orders to get rid of every speck of dust in Dustland. He was sick and tired of his town being the butt of so many jokes because of its name. He wanted to be known as the mayor of the cleanest city in the United States (if not the world) and not the mayor of a cloud of dust.

When my sergeant received the proclamation to rid Dustland of dust he took Rube quite literally. I wasn’t sure if Rube really meant that every speck should be removed, but as a well-trained and obedient cop I was much better at taking orders than at thinking. Maybe that is why I never could graduate from college.

I received my marching orders on July 5, the day after Independence Day. I was told to go to Dusty’s house and both get rid of all her dust bunnies and let her know that in the future the harboring of bunnies would not be tolerated.

I put a dustpan and collapsible broom in my brief case and set off in my Hummer for Dusty’s house.

I had never met Dusty but I thought that this would be a rather simple call. I had been married for a number of years and knew women well. Though my wife walked out on me when she found a younger man, we did have some good years. She generally took my direction, as do most women. I’m a big man with a commanding voice. Not too many people stand up to me, especially women."
Posted by Kim Mosley at 9:31 PM

Hello. This post is likeable, and your blog is very interesting, congratulations :-). I will add in my blogroll =). If possible gives a last there on my blog, it is about the Wireless, I hope you enjoy. The address is http://wireless-brasil.blogspot.com. A hug.

hi Kim, I seen that you like the four legged barker / licker
so I am here to say that I have recently started a funny dog website and welcome you to visit / follow / comment!
thank you,
Robbie~
http://thefunnydogpictures.blogspot.com/